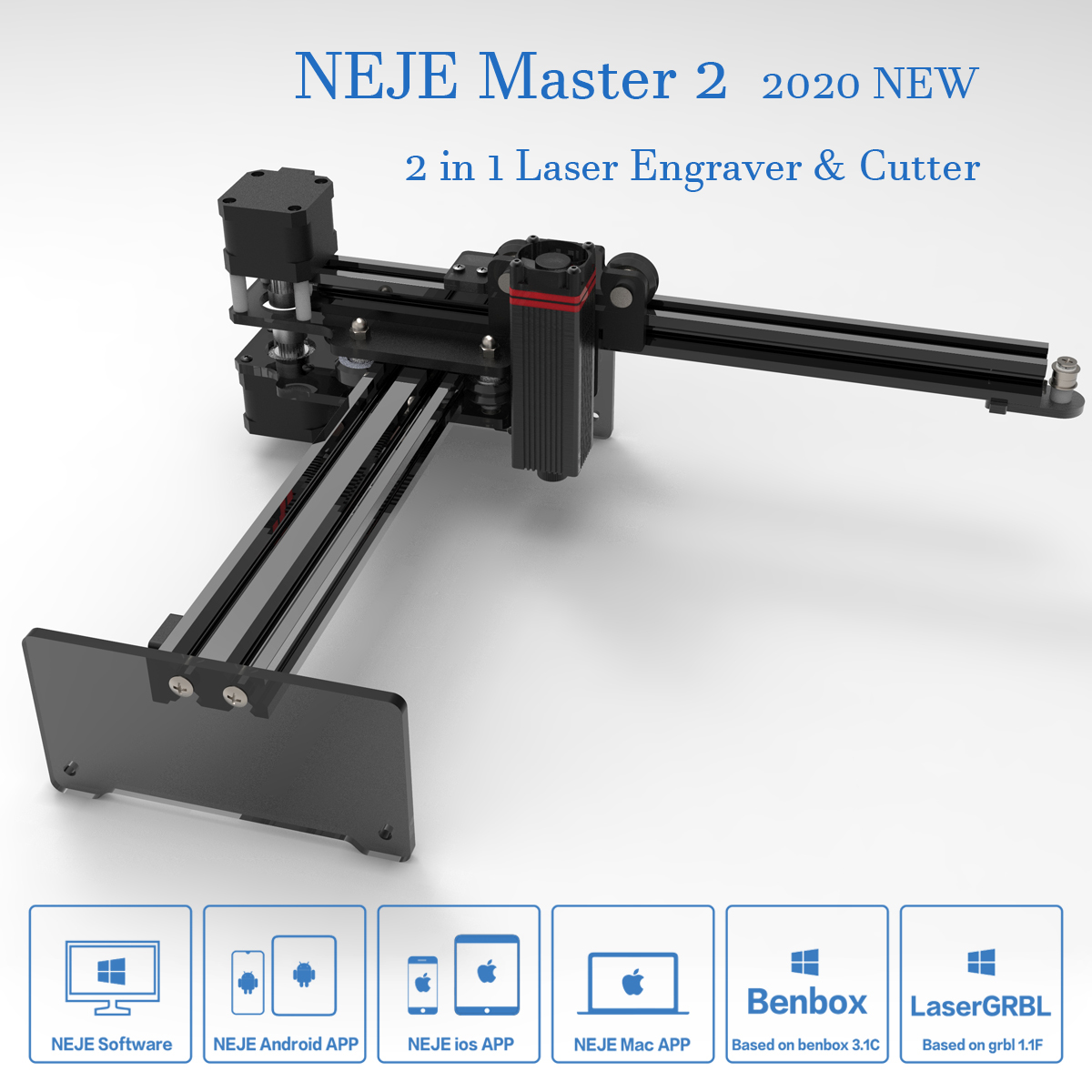 Most Ortur and Neje laser machines claim to be equipped with 15/17/20/40/80 watt lasers. Those lasers are not rated or properly tests and their maximum laser power is no more than  3-5 watt. 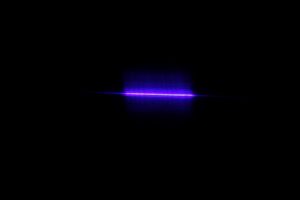 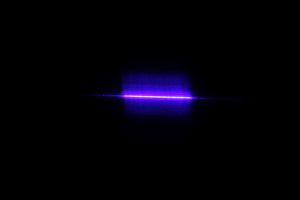 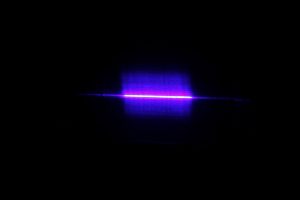 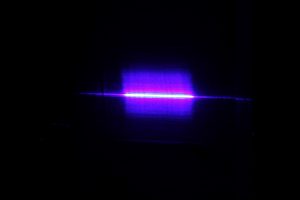 That is why laser cutting is very uneffective and laser engraving is also poor.

tomi koso  says: “I have build up laser engraver and have been using 5,5w neje laser. It have been pretty good, except those both have lasted approx 100h or less/each.”

Be advised that
It takes a product from mainland China at least a month to reach either the US or the UK.

No options at all to order an express delivery such as DHL.

The Ortur Laser Master 20W can engrave only on soft materials such as wood, leather, plywood, acrylic.

Cutting is not that efficient.

The laser cutter works with Windows-based software LaserGRBL or Benbox, which can be downloaded for free at our download center

Let’s see what they have.

Today we are going to cover NEJE Laser Modules the 4 that Bruce Benson owns currently.

Yes, I own 4 of the modules of NEJE diode Laser modules and run them using NEJE Master 2s engraver that came with the NEJE N40630 laser Module and NEJE power supply 3 amp 12 volt 36 watts. 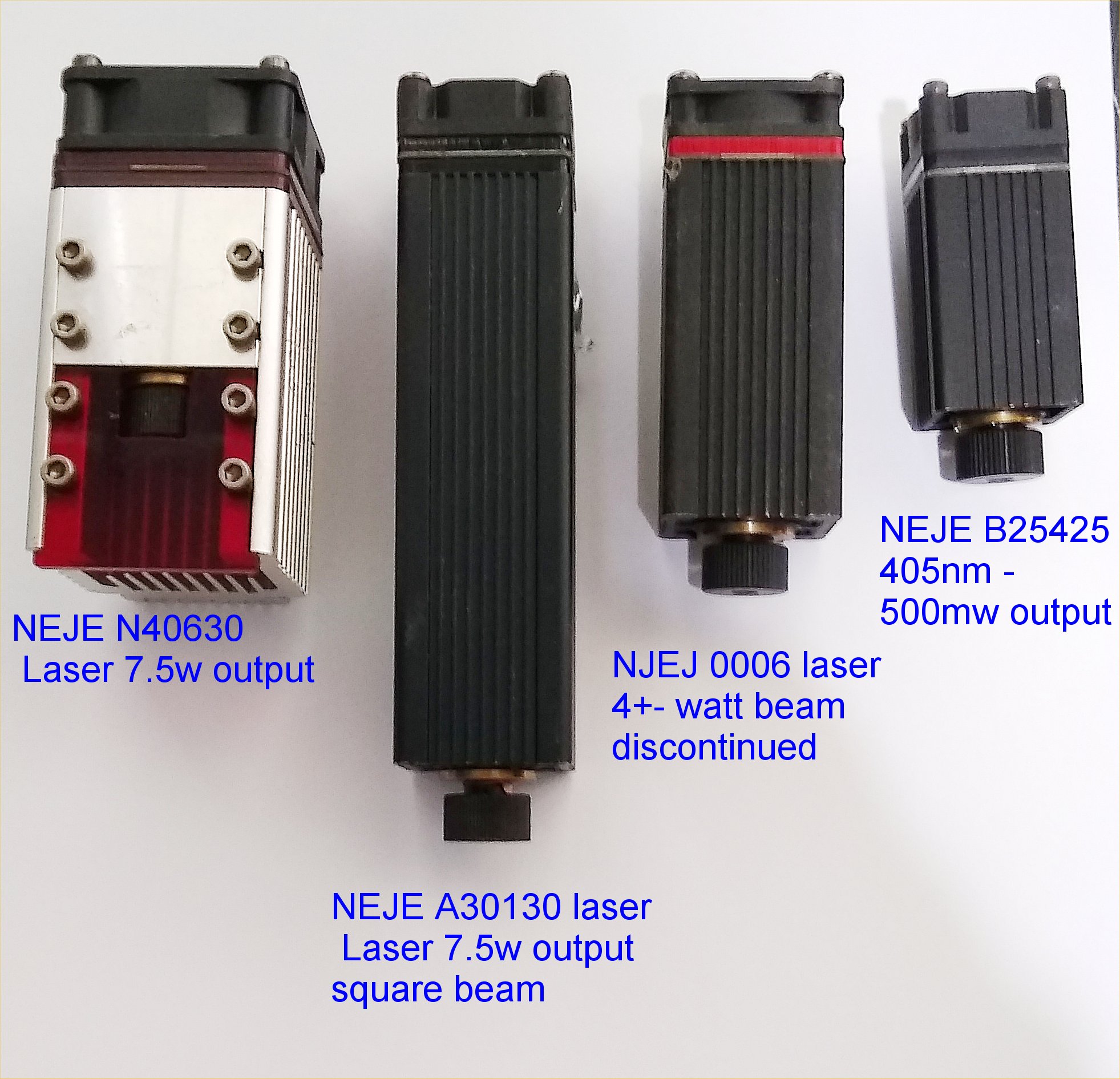 I suspect your wonder why I have so many NEJE modules and what are the issues I might have with them.

When I order my first ever laser engraver price was an issue. I had reviewed a lot of budget-priced lasers.

I was looking at the 20 -30 watt China-built laser engravers I shopped high and low and looked at box design Laser I like Outur frame better than NEJE It just seemed like it was built better. Nothing to do with the laser module they used. But price still being an issue one day on the top of my web browser google listed all the deals on a horizontal row of images so I scrolled thru them and found an advertisement for NEJE Master 2s 30w engraver for $165.00. WOW, I thought So I clicked on the ad and purchased this laser and waited for over 60 days following the tracking number right to my address. I looked outside my house nothing was there. I looked in my oversized mailbox and there was a little bag from the China supplier and I know something was wrong. This tiny bag had a tiny box and the NEJE 0006 laser module with a board to test it with. Man owes man was I disappointed. I ended up getting a 50% refund on my credit card and went shopping again. 15 days later my NEJE Master 2s 30w was delivered.

Now I had two laser modules to work with my new adventure in laser engraving. I tested the Android app and NEJE software on my Dell I7 laptop non was user-friendly so I downloaded Lightburn and It made life for this newbie very happy. I also had a brand new Ortur rotary roller system so I could engrave on glass with my new setup. I also joined a bunch of NEJE groups on Facebook trying to pick up on good settings and methods for engraving with the NEJE engravers. Some seemed to work most didn’t work so well. So after experimenting with all sorts of material to engrave I began to figure things out. I wanted finer images so I used a lot of grayscale settings in my work and found stuck to also give acceptable engravings with any of the engravers. I looked into modules offered by NEJE looking for the finest focusing laser advertised and ordered the B25424 NEJE B25425 405nm – 500mw output with a focus point of one Micron or .1mm.

After 2 months of running my Master 2s 30w machine with the N40630 30 watt module, I was hearing a lot of issues with this module putting out two laser dots on the work face and losing cutting power. Lucky me I thought. Up to that time, everything was going very well I had made air assist for it cut thru most plywood easily. Then the double dots showed up on my work and yes the wonderful cutting power of this 7.5-watt beam was gone. Noted this was the only problem I had with it but possible it was affecting some of the engravings with the power failing. I had taken the module apart to see why it might have gotten damaged from overheating and found the small metal block on the top of the module press fit into the finned housing without any heat sink compound Although the fan never quit working and the laser system worked without problems except the heat was not being removed from the laser properly. I did hook up the NEJE 0006 module and did videos of both cutting the 2mm and 3mm plywood only the NEJE 0006 cut thru in a few passes where the N40630 did not even go thru after 8-16 passes at 100% power and 120 mm/min speed. Then I wrote banggood the supplier of this after nearly 2 weeks I got a refund for the cost of this laser module if ordered from NEJE shop.

Looking thru the new assortments of laser modules wanting to stay far away from any of their 40mm x 400 framed modules because of what I had discovered no heat sink compound applied between the aluminum parts. So how in my right mind see them putting two 20 watt modules in the same area and get the extra heat out of that housing. Also, they claim 15 watts beam power most likely it might 10 watts . 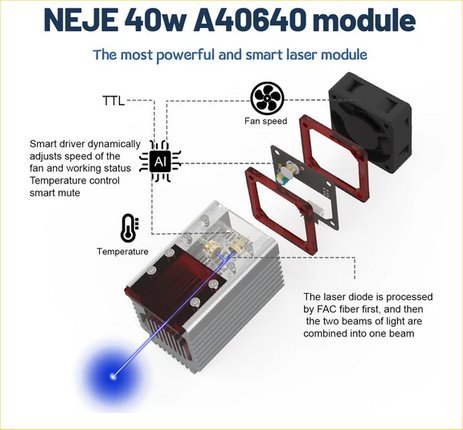 So far there are many complaints coming from this one also on Facebook.

So I got away from this design totally but ordered the A30130 30w square beam output of 7.5 watts and focusable lens for beam and a smaller beam square than the N40630 figuring it should give sharper images and manage the diode cooling much better.

This is a long video showing it hanging up 2 times you can see this is the replacement A30130 module.

This laser module never stopped working if doing text and line in lightburn only problem was getting it to work with images once it did the first image completely then it was good to go for the rest of the day.

Noted they did not mention for it might need a bigger power supply that came with the Master 2s 30w laser engraver. I’m now testing it with a 5 amp power supply 60 watts original was 36 watts. First test with the new power supply it locked up on the first image. It was 254 dpi grayscale images of 160mm x160mm.

The issue lays with a cold startup in the mornings noted after I get the A30130 working and go to shut down the laptop if I leave the engraver rest with power on overnight I have booted up the laptop and engraved large and smalls without much of a problem so far. It can engrave with great results I have done this with it. I have engraved on white marble stone using gold flake paint as a conductor for the laser.

NEJE 0006 laser module issue is there is no specification information on this even NEJE is at a loss can’t find it anyplace. The laser has worked so far trouble-free all though it spends most of its time just sitting in a box waiting on me to hook it up and run it.

NEJE B25425 issue is this laser module with its 405nm 500mw beam power and fine focus of ~150 microns. It produces photo-quality images at unheard of dpi grayscale or stuck. Yes running at high dpi take up more time than you might want to use but the wait is well worth the effort. It works so well I reordered a second just for backup. The cost out of pocket was $24.00 USD. I did have to make a case to mount it in but no issue doing that with my 3d printer. When I want to do tiny images with the finest of details like insects and post them on Facebook I get likes like crazy and compliments.

PS: although I set focus via the use of a USA microscope setting focus at recommended manufactures height makes a difference on how well laser modules cut thru materials. It also will make a difference in how deep your engraving is and how fine your engraving lines are.

“Alexander Scheiflinger says It depends on what your are looking for. For normal engraving and woodworks they have plenty power and they are cheap. Ideal for beginners. The quality of engraving is similar to other machines/lasers.

I have the Ortur Laser Master 1, which is very small and portable. LaserGRBL is a good Software but you can use Lightburn as well, no problem.
Cutting plywood up to 4mm is no problem with “20W” or even with lower-powered lasers. Could not engrave stone, no problem with Endurance Laser.
Had to change POM rollers and rollers from other Chinese manufacturers were broken out-of-the-box. After a few engravings the Ortur did not work anymore, so very low-quality parts. Got free replacement parts under warranty without problems from Ortur.

I had a very good experience with Ortur Support, directly from FB Group. Support from suppliers does not exist, that’s true. But that’s what you get when you buy cheap from China…”

Gary Castle says: ‘Have that NeJe small one, took forever, frame cracked, got it to burn 5-6 small wooden usb 8g and then it couldn’t focus or burn anything, so they suggested new lasar… cost as mush as complete unit!’

Gerald Oliver says Got the NEJE “20W” MASTER version 1 ( no Gcode ).
I’ve bought it to move from NEJE DK8KZ “1 watt” which worksize was 5×5 cm (and cost $99 in 2018).
The Neje 20watt got a 15x15cm worksize (17 if you play with firmware).
The software provided is a cheap software. You can’t work with color layers. Meaning you can engrave and cut in the same run.
I have tryied to connect the Neje 20Watts Master 1 to Lightburn (upgrading firmware + GRBL up to 1.1f ) but there’s no official drivers for this device. So I have used some “profiles” that guys provide in NEJE facebook group.
I was able to engrave a dog shape, it did it in a continuous line which was not the case with default software. But when the head move to the starting engraving point, it engraves all the movement …
(guess that some gcode command where not adapted to this device)

when you want to engrave a 6x6cm display with NEJE on PMMA , it takes 1 hour.

I was never able to cut Masonite 3mm even with 10 pass.
(it burnt all the edges)
There’s no Air assist on this device.
It can engrave already shaped objects you can find on the web, but can’t really cut. That’s why all NEJE users are engraving wood keyring, pencils , rings, tiles, slates … but they can’t create their own objects.

The positive point are that it’s cheap.
it’s a portable device you can backpack everywhere.
Cheap device = many people = many customisations = many ideas

Some comments about tech specs for Ortur and Neje engraving machines:

“NEJE Service: We provided 2 years warranty and full life customer service. If you have any questions about this engraving machine, please contact us, we will reply to you in 24 hours.”

We get dozens of emails, chat request where customers are looking for support and most of them say Neje and Ortur support never replies to them(((

That is where a manufacturer proves that they sell less powerful lasers than what is advertised! Even 5.5 watt laser should be able to engrave metals, glass, stone, ceramics, stainless steel, reflective materials and transparent materials 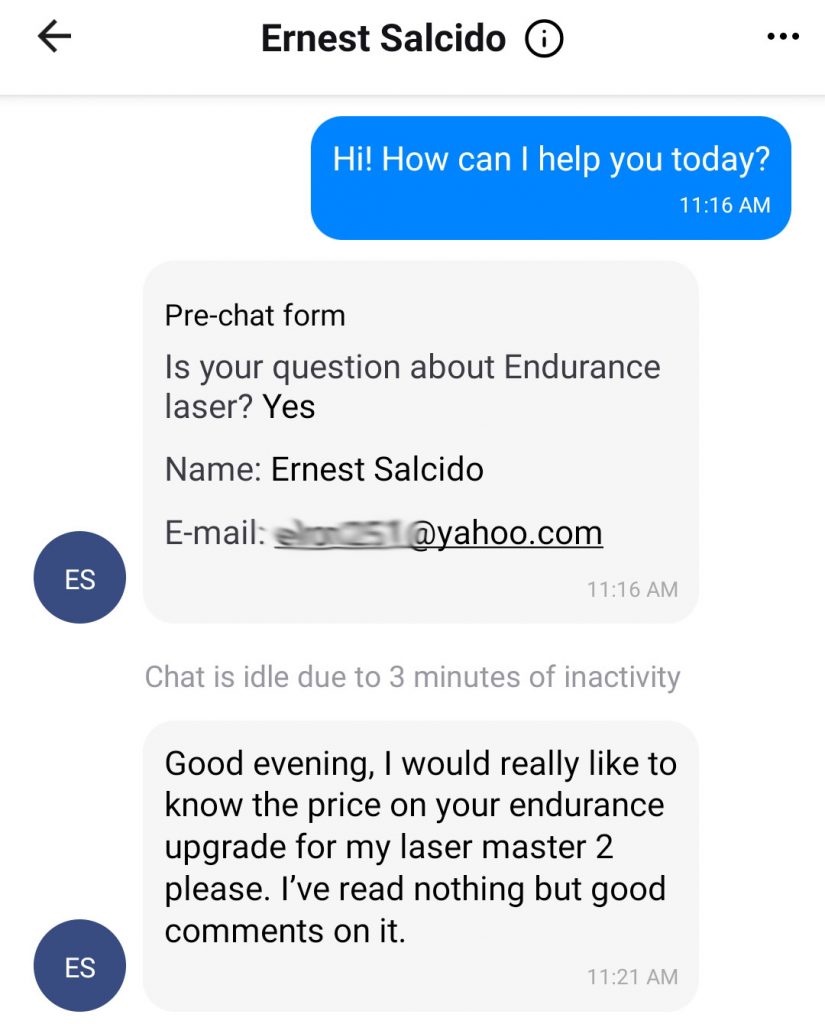 The ENDURANCE DPSS 4 Watt-Laser. How to Install It on NEJE Laser Engravers