Hi everyone, I’m Zax the developer of T2Laser software. I worked in the CNC industry for over 20 years as an electrical engineer and have a lot of experience with high-end systems and software.

I purchased my first diode laser engraver from Banggood in January 2016 and received it 2 weeks later. I was so excited, and even though there were no instructions, I had it assembled the same day.

Then the excitement turned to frustration as I found all the links to the software (Benbox) contained viruses or malware and were blocked by my security suite. I began looking for alternatives which consisted of Inkscape plug-ins or programs that cost >$100 and generated G-code but wouldn’t run the machine.

That’s when I decided to develop my own software, as I really didn’t need another “door stop”. I had no intentions to sell it, however, I soon found others on the forums in a similar situation and desperately in need of quality software. I decided to offer it at a nominal fee to cover my costs and to enable continued support and development, it was, and still is a hobby to me.

T2Laser was designed to produce optimized G-code for outputting high-quality greyscale images using PWM or velocity mode. I also wanted it to support homing switches and other features that weren’t available at the time. Obviously, many more features have been added over the last few years; T2Laser now supports vector cutting, 2.5D, and 3D CNC machining, rotary axis and much more. It remains an easy to use and more importantly very stable platform. I use it daily with a K40 CO2 laser, several diode laser systems, a plotter, and a larger CNC machine.

I’ve seen some machines improve in quality over the years, and the lasers get more powerful, but there are also more “clones” with inferior designs and over-driven diodes that have a poor lifetime. The Endurance laser modules are the exception when it comes to high-powered laser diodes, and that’s good to see. I also appreciate the excellent support they offer which is something I consider important.

I have met some great people through the forums and continually hear stories and see great results using my software. I look forward to enhancing T2Laser and supporting users for many years to come. 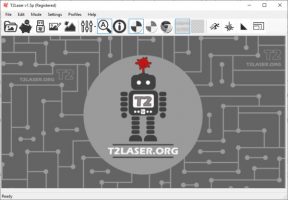 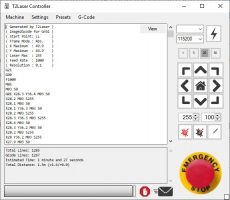