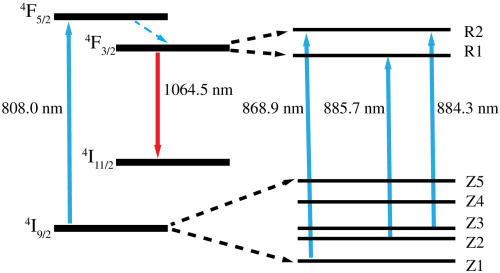 As a physical phenomenon, laser excitation (pumping) is the energy transfer from an exterior source to the active laser element.  Excitation is a necessary condition for triggering of the spontaneous laser radiation. However, this is not enough to create a controlled (pulsed or continuous) radiation. The next step is to provide radiation amplification in the active element. Technically, this problem is solved by the selection of the resonator. Equally significant is the choice of the shutter. The shutter is a part of the resonator that maintains the generation and the radiation output from the laser. The shutter speed, loss percentage, and locking quality are of great importance for the radiation time and power parameters.

Let’s take a closer look at each of these basic elements.

The choice of the pump diode (the pump wavelength, to be more precise) depends on the chosen active element crystal.  The essence lies in the chemical structure of the crystal. To cause generation in the active element you need to excite the crystal. 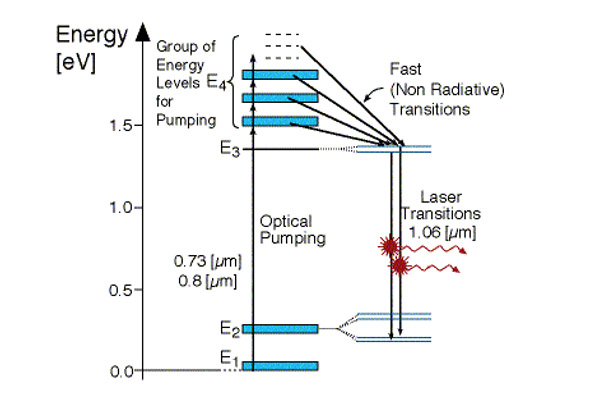 The neodymium Nd 3+ dope is necessary to activate the YAG because the pumping radiation interacts with it. The neodymium electrons exposed to the radiation with wavelengths of 0,73 and 0,8 um transit from the ground state E1 to the excited state E4. The life span at the E4 level is extremely short, which is why the excited electrons are forced to relax down to lower levels. A nonradiative transition of the YAG crystal to the E3 level, which is the upper laser level, is the most probable. From it a transition to the E2 level, the lower laser level, with the radiation at a wavelength of 1.06 microns, takes place. The population inversion, a prerequisite for the laser radiation, occurs due to the rapid filling of the E3 level by means of transitions from the E4 and the rapid depletion of the E2 level by means of transitions to the E1. And, going back to the beginning, the cycle continues thanks to the transition of the electrons from the level of E1 to the E4 under the influence of the pumping radiation.

Continuous (stationary) pumping requires good temperature stabilization of both the pump diode and the active element for the stable power and the radiation spectrum. The main issue lies in thermal effects, changing the pump diode spectrum and worsening the efficiency of the lower laser level depletion. Pulse pumping fills (populates) rapidly upper levels when lower levels are empty. This allows getting a high-power pulse with the pulse output laser radiation. To get continuous radiation one needs to increase the pulse frequency, for which the resonator shutter is responsible.

The end and transverse pumping schemes are shown in Figure 2.

Fig. 2 – Types of diode pumping: a) end and б) transverse

The transverse pumping (lateral side) allows for a large area of contact with the active element, but due to the use of a line of laser diodes, the pumping spot is heterogeneous in the length of the active element and significantly worsens the output laser characteristics. The end (longitudinal) pumping has a number of advantages: higher efficiency, a much lower noise level in the laser output signal. It is possible to form a homogeneous spot at the end face, which increases the laser radiation power and its efficiency.

Thus, the pumping method affects the efficiency of the laser, pulse frequency, and radiation power.

The resonator in the laser plays the role of an amplifier of the initial spontaneous transitions and is necessary for getting a significant output power. In the case of pulsed lasers, the resonator should act as an energy accumulator. In the case of stationary lasers, the resonator is used to maintain the generation: it is necessary to keep in balance the loss of the energy spent on the output radiation and the accumulated energy for the subsequent amplification and excitation of the generation.

In most cases, the optical resonator is the Fabry-Perot resonator. It comprises of two coaxial parallel mirrors. Figure 3 shows various resonator configurations. One of the mirrors is blind, the other is translucent. These types of the resonator are called stable and are used for low-power lasers, because at high intensities the radiation absorbed by a translucent mirror causes mirror destruction resulting in the generation cutoff. 1) parallel-plane, both mirrors are plane;

2) spherical, the mirrors of an equal radius R, the distance between them L=2R;

4) confocal,  the mirrors of an equal radius R, the distance L=R;

5) convex-concave, the mirrors with different radii, and the distance between them R1-R2=L.

Powerful lasers use circuits of unstable resonators, the principle of which is based not on the absorption of energy by a translucent mirror, but on its loss. Figure 4 shows circuits of unstable resonators with radiation retention in the resonator in the center of the optical axis. The disadvantage of such schemes is the ring structure of the beam – the power density is concentrated along the edges of the beam and is absent in the center. In some applications, this feature of the beam requires optical and technical solutions to improve it.

Fig. 4 – Unstable resonator schemes: а) with a convex mirror of a small diameter;  b) with a tilted mirror and an elliptical manhole.

Other variants of the unstable resonator are based on the optical axis deviation and removal of the part of the radiation out of the resonator (Figure 5). 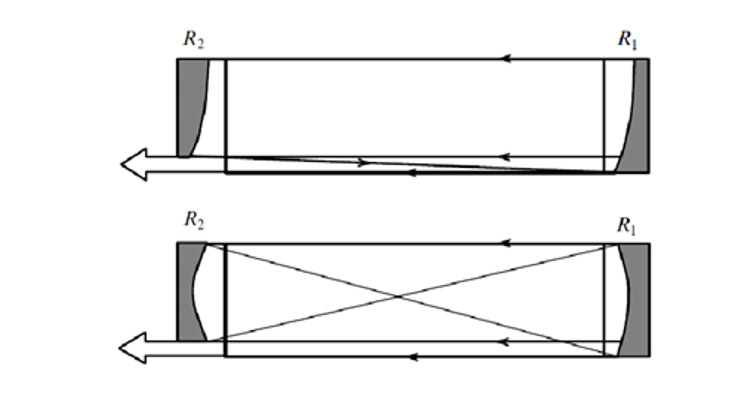 The resonator configuration determines an important parameter – the degree of the generation gain. This directly affects the radiation power.

A large selection of mirrors is provided, for example, by Thorlabs manufacturer https://www.thorlabs.com/navigation.cfm?guide_id=15

Other elements are often added to the resonator between the mirrors, such as mechanical shutters, prisms for changing the optical path, polarizers,  acoustic or electro-optical modulators. This enables to get high efficiency of the radiation generation of the required frequency and formation of a given pulse profile; it is also possible to regulate the duration of the pulse and its power.

The shutter is an optional element of the laser. For example, the laser pointer has only a forming optics, passing through which the radiation immediately goes out. In more powerful gas lasers to stop the laser beam, the shutter may be absent due to its inefficiency – it is easier to turn off the power to stop generating than to design a shutter with cooling. Currently, acoustic and electro-optical shutters have been widely used to produce powerful short pulses.

Modulators have two main applications. First, they are needed in communication systems to modulate a signal for information transport.  Second, they are used to generate high-power pulses in a Q-switching mode. To understand the essence of this mode, let’s turn to figure 6.

When it comes to the quantum nature of light, the best analogy is the flow of water molecules. As mentioned above, it is necessary that there were more particles at the upper laser level than the lower level to maintain the generation. In this case, we will have stationary radiation. This is similar to the situation  when we need to empty water out of a vessel via a side hole. The water height in the vessel should be above the hole. Then the water will go through the side hole. But what if we need a flow of a certain intensity? For this, we need to block the hole, collect more water and then open the hole and release the water immediately. The jet will be more intense. The same should be done with the laser – lock the exit hole so as to eliminate the energy loss and direct it all to create inversion. And if we open the shutter now, we’ll get a powerful pulse of radiation. 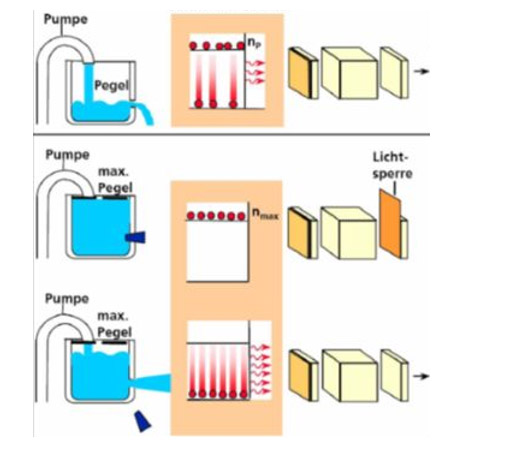 Fig. 6 – An analogy of a Q-switching mode

The principle of the acoustic and electro-optical modulator is based on the change in the refraction index of the crystal under the influence of ultrasonic waves. Figure  7 shows the look of the acoustic and optical modulator and the mode of its operation. A standing sound wave in an optical medium creates a semblance of a diffraction lattice in a crystal. The light interacts with a sound wave and splits up into traversing and diffracted. The operating speed of the modulator is determined by the time of the signal passing through the cross-section of the light beam and has an order of magnitude of 10-7s.

The acoustic optical modulator is a simple and reliable device, but its main drawbacks are as follows: shifting of the laser radiation frequency by the size of the acoustic modulating frequency, small diffraction efficiency, and, therefore, loss of the useful radiation power.

Electro-optical modulators have the best properties. They are based on the polarizing effects of Kerr and  Pockels. Both phenomena are similar in the mode of operation and are based on light polarization and differ in optical mediums. Figure  8 shows how the Kerr cell works. The Kerr cell is a dielectric substance between the charge plates, to which voltage U is applied, causing a strong electric field in the dielectric. Without the electric field, the cell stops the light. When an external field is turned on double refraction takes place in the dielectric, due to which the cell becomes transparent for the passing light.

Fig. 7 –  Mode of operation of the modulator based on the Kerr cell.

Kerr and Pockels cells are  widely spread and are a most fast-acting device to control the light beam intensity (with a response rate of 10-9—10-12 s.)  Thorlabs, for example, presents a wide range of electro-optical modulators.   https://www.thorlabs.com/navigation.cfm?guide_id=2090

To create a Q-switching mode, the modulator is placed inside a laser resonator as a shutter. If the shutter is shut there is no output window, and no laser radiation is possible. This contributes to the creation of conditions for population inversion. If you open the shutter sharply afterward, the accumulated energy will be released in the form of an intense short pulse.

The aspects discussed in this article cover only a small portion of technological solutions in the development of solid-state lasers. However, they are important achievements and demonstrate the basic principles of laser operation.