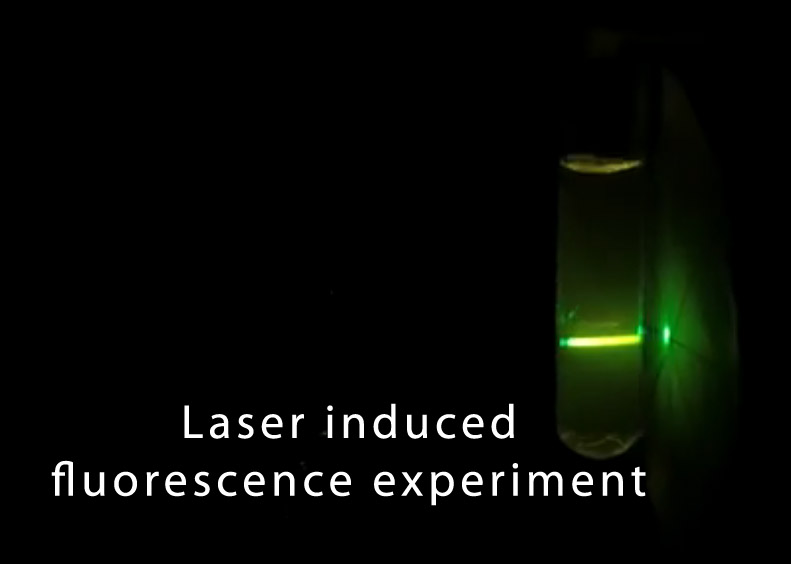 In the experiment, we are using 3 types of lasers: red 650 nm, green 532 nm, blue 450 nm. Here we used various concentrations of chlorophyll and fluorescein and olive oil as fluorescence liquids. As a bonus, we used glow sand with fluorescence and phosphorescence. 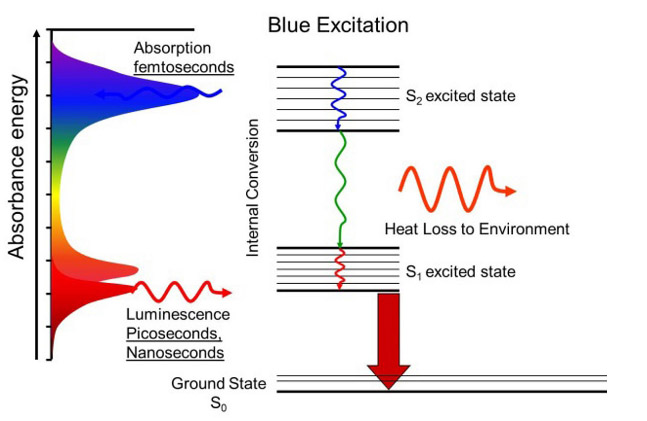 What is the Jablonski Diagram? 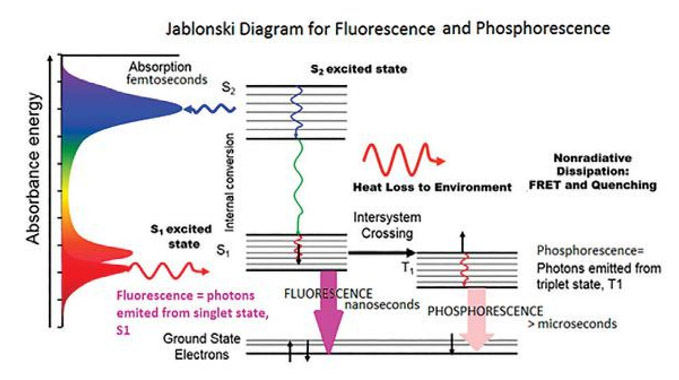 Fig shows the Jablonski diagram (Jablonski, 1933), a schematic of the transition of electronic state of a molecule during the fluorescence phenomenon. The left axis shows increasing energy, where a typical fluorescent molecule has an absorbance spectrum. This spectrum shows the energy or wavelengths, where the molecule will absorb light.

If the incident light is at a wavelength where the molecule will absorb the photon, the molecule is then excited from the electronic ground state to a higher excited state, denoted S2 here.

The electrons then go through internal conversion, affected by vibrational relaxation and heat loss to the environment. It then emits a photon from the lowest-lying singlet excited state in the form of fluorescence.

In conventional fluorescence, photons are emitted at higher wavelengths than the photons that are absorbed. This diagram is extremely important to understanding fluorescence. When measuring a fluorescence spectrum, one is typically looking at the intensity at which a molecule emits, the wavelength or energy at which it emits, and also the time which the molecule spends in the excited state. This is the fluorescence lifetime, explained further in detail in the coming sections.

Any number of things can affect these observables, including energy transfer to and from other molecules, quenching by other molecules, temperature, pH, local polarity, aggregation or binding. Understanding the mechanisms of these interactions can give us insight into what is being observed with a change in fluorescence spectra or lifetime.

There are two non-radiative deactivation processes that compete with fluorescence: internal conversion from the lowest singlet excited to the ground state and intersystem crossing from the excited singlet state to the triplet state. This last process leads to a phenomenon called phosphorescence, explained in further detail later on.

Phosphorescence measurements use a longer-lived pulsed source, such as a xenon flash lamp. The timing of the flashing lamp can be used to measure spectra at different phosphorescence lifetimes.

Preparing samples for the experiment

Extra virgin olive oil is from my kitchen 🙂 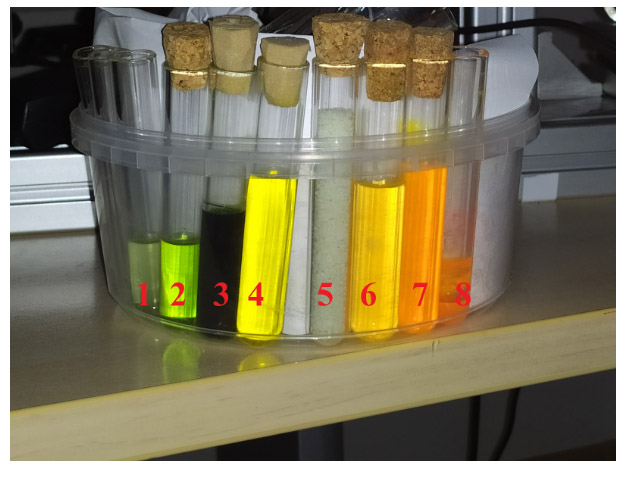 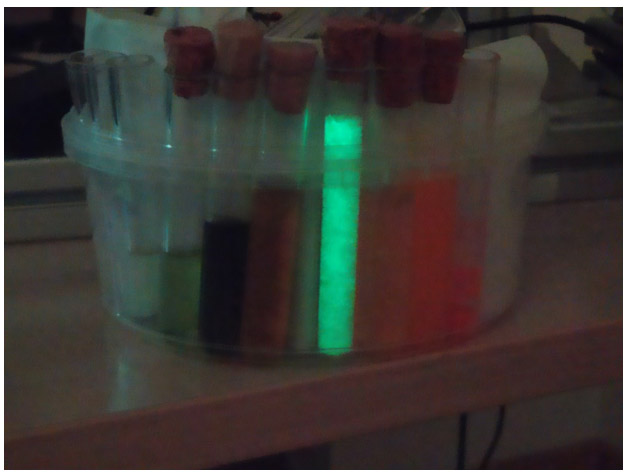 Test tubes after experiment, visible phosphorescence in the one sample 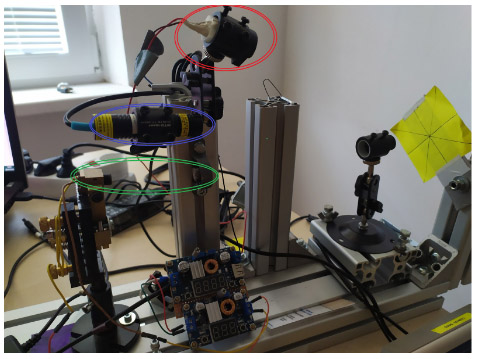 This laser is not making fluorescence at any sample. The beam is visible in the chlorophyll and fluorescein. 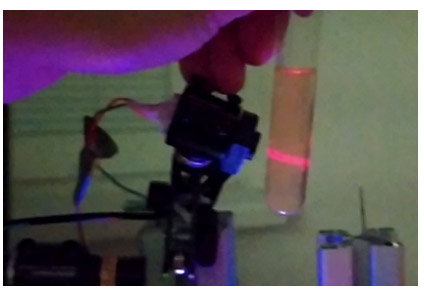 The blue laser is making fluorescence at all samples. 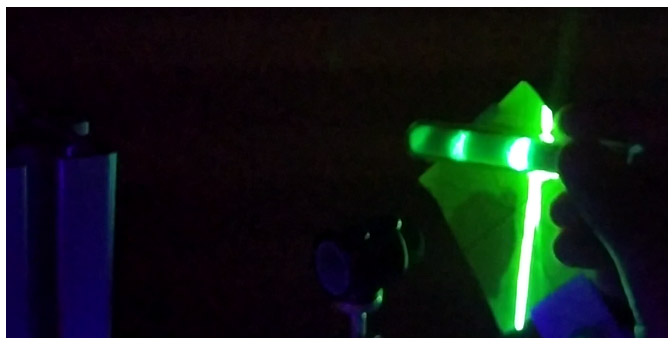 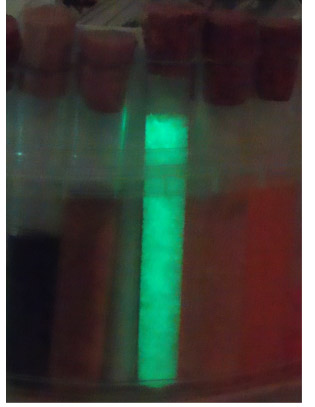 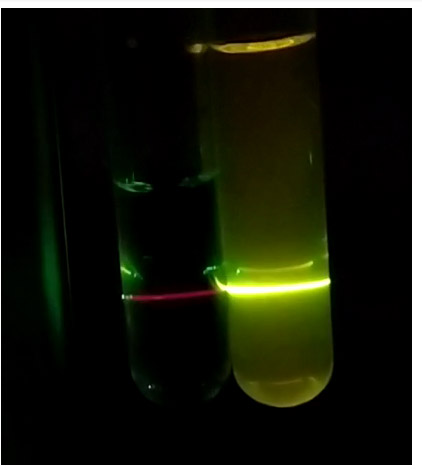 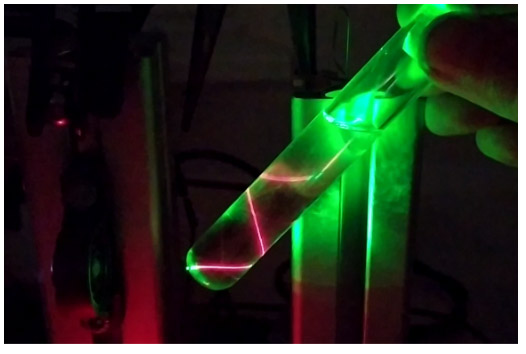 Fluorescence in the olive oil