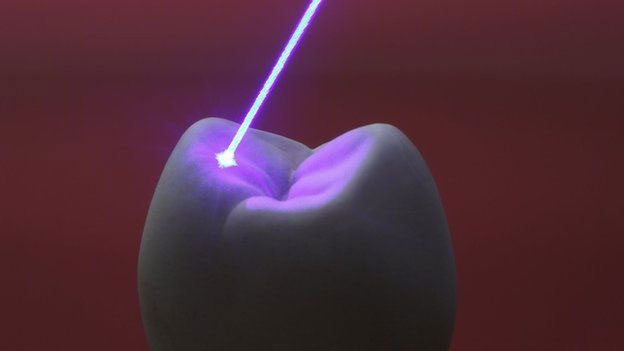 Implementing of laser technologies in biological-medical science, we witness significant achievements in medicine, particularly, in diagnostics and treatment of challenging diseases. Usage of modern technologies such as laser treatment helps achieve better results and decreases complications and side effects.

Lasers, as it is observed, are effective in the oral cavity preparation, caries prophylaxis, and treatment, restoration removal, treatment of dentin hypersensitivity, tooth whitening, etc. Based on the adhesive dentistry and spreading of the principles of minimal invasion, lasers may significantly change cavity design and preparation.

Below is a review of clinical and experimental studies of the laser application in dentistry.

It was shown that the highest absorbance of the isolated bacteria Streptococcus Mutans, causing the decay of the teeth,  was in the ultraviolet (UV) wavelengths. 22 minutes were needed to kill the bacteria with the light of a 20 mw Diode-Pumped Solid-State Laser (DPSSL) with a wavelength of 405nm. The laser energy appeared to be sufficient to cause damage inside the bacterial cell and kill the bacteria. The study proved that the laser is able to kill the bacteria causing tooth decay (Streptococcus Mutans) and can be effective in the dental equipment and materials sterilization to eliminate such bacteria.

Enterococcus faecalis (E. faecalis) is a bacterium commonly detected in the root canals of teeth with post-treatment apical periodontitis or advanced marginal periodontitis. It has the ability to live in an extreme environment and survive as an organism with its virulence factor possibly contributing to the pathogenesis of post-treatment apical and marginal periodontitis. Photodynamic therapy (PDT) is an urgently required alternative method of improving therapy effectiveness. Photodynamic therapy combined with conventional endodontic treatment decreases the number of antibiotic-resistant bacteria and biofilms. Chlorophyll is one of the photosensitizers added to enhance the absorption of light in photodynamic therapy.

The introduction of photo-activators, with absorption spectra in the violet region, in composite resins raised interest in the use of 405 nm diode lasers for polymerization. Two different resins were used for the experiments: Filtek Supreme XT flow (3M ESPE, USA) and Tetric Evo flow (Ivoclar, Vivadent). The photo-activator used is Camphoroquinone, alone, or in combination with Lucirin TPO. The resins were treated with a halogen lamp (Heliolux DXL, Vivadent Ivoclar, Austria), a broadband LED (Valo Ultradent, USA) and a 405 nm laser (Euphoton, Italy). By measuring the volumetric shrinkage the laser-induced the lower change with both composites. Considering that the polymerization process strongly depends on the kind of composite used the effectiveness of 405 nm laser proved to be lower than halogen lamps and broadband LEDs.

The safety of using a 445 nm laser on dental implants by comparing it with a laser with 970 nm wavelength was evaluated. Two models, a pig mandible and glass ionomer cement, were used to evaluate the temperature increase in dental implants during laser irradiation with both wavelengths. Neither the 445 nm nor the 970 nm wavelength showed any signs of surface alterations on the titanium discs. Using a 445 nm laser on dental implants is as safe as using a 970 nm laser, in terms of temperature increase and surface alterations. Applying a generous amount of cooling water and irradiating in short intervals is important when using lasers on dental implants.  (https://www.researchgate.net/publication/337585926_Using_445_nm_and_970_nm_Lasers_on_Dental_Implants-An_In_Vitro_Study_on_Change_in_Temperature_and_Surface_Alterations?_sg=XyBraNvh72mp5648bG7JWQBynOzLt4DOIHHSGc-AQDj9mcy_JRL5sXytpP5MZNPa1yqQvqnTYms8hV0).

The success of root canal treatment depends on the quality of the elimination of the pathogenic germ. The aim of this study was to evaluate a novel 445 nm semiconductor laser for its germ-reducing effect during chemomechanical root canal treatment. The diode laser (SiroLaser Blue, Dentsply Sirona, Bensheim, Germany) 0.6W, in continuous wave mode (cw) for 4x10s was used. The study showed a tendentially better bacterial reduction with combined 445nm laser irradiation and sodium hypochlorite rinsing. The percentual reduction of bacteria was: sole laser therapy 72.4% (min: 39.4, max: 99.9), sole sodium hypochlorite rinsing 92.0% (min: 66.6; max: 99.4). Both groups showed less reduction than the combination of sodium hypochlorite rinsing and 445 nm laser irradiation with 95.8% (min: 85.3, max: 97.8) (p>0.05).

The aim of the study was to evaluate the clinical and microbiological effects of neodymium: yttrium-aluminum-garnet laser therapy as an adjunct to scaling and root planing during the hygienic phase.  In eight patients, sites with a mean probing pocket depth (PPD) of ≥5 mm were treated by either scaling and root planing (n=28) (control) or by scaling and root planing and adjunctive laser therapy (n=28) (power: 5W). No statistically-significant differences between the test and control sites were found for any clinical or microbiological parameters at baseline, after initial, and 3 or 6 months’ post-surgical therapy. Thus, during the hygienic phase, neodymium: yttrium-aluminum-garnet (1064 nm) laser treatment yielded no superiority in clinical efficacy compared to conventional debridement. Laser gingivectomy resulted in similar treatment outcomes (mean PPD and bleeding on probing reduction), as did conventional gingivectomy.

The aim of this study was to verify the effectiveness and safety of the 808 nm wavelength for use on benign lesions of the oral cavity that are stained with toluidine blue solution. An 808 nm  diode laser was used because its wavelength is well absorbed by the blue color and barely by the healthy mucosa. The non-contact photocoagulation kept the surrounding borders intact due to the pulsed-emission, 50 ms 7 W, without anesthesia. No sutures were needed. The vaporized lesions healed completely in about 5-7 days without any kind of treatment, leaving some slight elastic white scars. A mild edema-erythema followed the treatment for 5-7 days. The selective results confirm the effectiveness of this therapeutic procedure on pigmented benign lesions, pre-treated with exogenous chromophores and photocoagulated without bleeding, with a minimum energy 808 nm laser.

The purpose of this study was to evaluate the effect of laser-assisted (808 nm) surgical uncovering, on the tooth emergence and orthodontic treatment of delayed tooth eruption (DTE).

The laser wavelength was 810 nm and it was set in a continuous wave mode at a power output of 1.6 watt with a 0.3-mm diameter fiber tip. When the target tissue was sufficiently anesthetized, the tip was directed at an angle of 10 to 20 degrees to the tissue (light contact mode); and was applied continuously for approximately 12 Seconds until an acceptable tooth exposure area was visible. The data analysis showed that in patients with DTE, laser intervention significantly accelerated tooth eruption (P < 0.05). Laser-assisted surgical removal of the fibrous tissue over erupting premolars (DTE) with appropriate irradiation parameters appears to be a promising adjunct to orthodontic treatment for bringing the premolar to the aligned and leveled dental arch.

Get the best deal from Endurance Lasers