Here is a list of the most common way of using diode lasers.

Solid-state lasers are able to operate both in a pulsed and in a continuous mode.

Calcium-fluorite CaF2 Dy dysprosium-doped lasers and yttrium-aluminum-garnet lasers with dopes of various rare-earth atoms are examples of solid-state continuous-wave lasers. Most of these lasers operate in the wavelength range λ from 1 to 3 microns. A typical value of the generation power of a solid-state laser in a continuous mode is ~ 1 W or fractions of W, and ~ tens of Watts for an yttrium-aluminum-garnet laser. Without special conditions, the generation spectrum of solid-state lasers is relatively wide, since a multimode generation mode is usually realized. However, by introducing selective elements into the optical resonator, it is possible to obtain a single-mode generation, which is usually associated with some decrease in the generated power. There are certain difficulties in the process of large single crystals growing or cooking of large samples of homogeneous and transparent glass.

Let’s consider as an example an Nd: YVO4 solid-state laser.

The Nd: YVO4 crystal is in high demand for the production of solid-state lasers. The high absorption coefficient, absorption in a wide bandwidth, and the high probability of stimulated emission at the generation wavelength in an Nd: YVO4 -doped crystal are three main advantages of  Nd: YVO4 crystals as compared to other materials in the diode-pumped solid-state lasers manufacture.

Manufacturers have been looking for ways to grow high-quality Nd: YVO4 crystals since the 70s. Experts should be aware that grown crystals give higher quality components, despite the fact that the process of crystals growing in large quantities is very complex, not to mention growing of large crystals. Currently, ITI has managed to become a leader in the production of Nd: YVO4 crystals. There are also other materials with such dopes as Er: YVO4 and Yb: YVO4.

Rare-earth ions or ions of the iron (Fe) group are commonly used as activators. Optical and semiconductor lasers are pumped according to a three- or four-level scheme. Modern solid-state lasers are capable of operating in a pulsed, continuous, and quasi-continuous modes.

Various mechanisms are used to create the inverse population of the laser medium. In solid-state lasers, it is carried out by means of irradiation with powerful gas-discharge flash lamps, with focused solar light (the so-called optical pumping) or with other lasers (in particular, semiconductor).

For the first time, induced radiation in the optical range was obtained by T. Maimann in 1960 in a solid-state ruby pulsed generator. The creation of the first laser was preceded by the fundamental studies of Soviet (A. M Prokhorov, G. N Basov) and foreign (A. Shavlov, U. Townes, D. Weber) scientists. Another type of solid-state pulsed lasers were four-level neodymium-doped glass oscillators with a radiation wavelength of λ0 = 1.064 μm. This generator was created by E. Snitzer in 1961.

To describe a solid-state laser model, we need to fulfill three basic conditions:

In the first system, the optically pumped radiation transfers the quantum particles into a wide absorption band Е3, and then the atoms quickly pass to the metastable level Е2. If the pumping power is sufficient, then population inversion arises between the main Е1 and Е2 level. The stimulated emission is generated from the metastable level Е2. to the main level (or from Е3 to the auxiliary level Е2 in a four-level system).

In a general case, the change in the level populations is caused by three quantum mechanisms: by spontaneous transitions to lower levels; by stimulated emission and absorption; by nonradiative transitions excited by thermal processes and interactions with lattice vibrations. 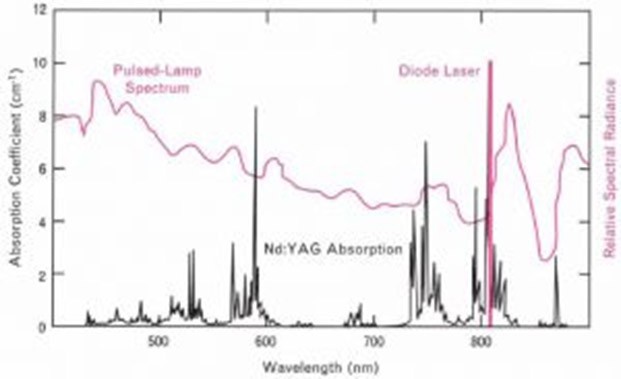 The increase in efficiency is associated with more efficient use of optical radiation pumping. Figure 2  shows the absorption spectrum of the most common solid-state laser material (Nd: YAG), and the output spectrum of a flash lamp and a diode laser, illustrating increased efficiency.

Optical absorption of Nd: YAG exists only in relatively narrow wavelength ranges; thus, most of the energy of the lamp broadband radiation passes through the material without absorption.

This increase in efficiency has more positive effects. The amount of heat removed in Nd: YAG  is reduced by three as compared to flash lamps, which reduces cooling requirements and allows using of contact cooling instead of liquid cooling in many cases. When an Nd: YAG is pumped with continuous Kr arc lamps instead of flash lamps, the thermal load is reduced. Heat causes thermal deformation of the amplifying medium, which reduces the laser efficiency; these problems come down to diode pumping.

The main disadvantage of the laser diode as a pump source is purely financial. They are much more expensive than lamps or arc lamps. Today, the lamp needed to excite a 10 watt laser costs several hundred dollars; the cost of the equivalent number of laser diodes is several tens of thousands of dollars. However, according to estimates, the price of laser diodes will drop significantly as their production volume increases, similar to other semiconductor technologies, such as integrated circuits.

Our lasers are very reliable and powerful. We are ready to asssit you in our

The disadvantages of using laser diodes for solid-state laser pumping are greater complexity, lower efficiency, and high cost. In practice, their application imposes a number of requirements, such as the required overall efficiency, peak power, wavelength, and radiation intensity; this is what determines the choice.

All you need to know about diode lasers