Right now we are trying to find the best way to focus a few beams at one spot.

Here are our thoughts and ideas.

The task: to ensure operation with two sources of laser energy for increasing the power density of the resulting laser beam.

Supposed ways of solving the problem:

Optical systems (OS) serve to apply the laser energy to the place of treatment, to regulate the laser parameters, to form a laser beam with high power density, to visually focus the beam at the action point, to control the process of treatment and to evaluate the end result. Optical systems constructed to  transmit and transform powerful operating laser energy are called energy OS. According to their functional features, they may be divided into: a) focusing, b) scanning, c) projecting, d) distributing.    The element base of OS consists of focusing, refracting and reflective elements.  In the visible light and  nearest infra-red range full internal reflection prisms and interference mirrors with multilayer dielectric coatings are used. The use of the latter makes it possible to reduce radiation losses (anti-reflection coatings). In operating at λ = 10.6 μm, mirrors with coatings of Al and Au are used, which have a high reflection coefficient R and are resistant to oxidation.

In energy optical systems using powerful lasers, especially, operating in the continuous wave laser regime,  the optic elements are of paramount importance. For the laser radiation with λ = 0.69 and 1.06 μm, most optical glass grades have a small absorption coefficient and are used up to I0 = 103 W / cm2. At a wavelength of l = 10.6 microns, they are opaque, the material for the production of lenses is the single crystals of KBr, NaCl, GaAs, Ge, etc.

Simple estimation of the minimum spot radius rs at ideal focusing can be done according to the ratio:

where f is a focus range, θ is laser beam divergence.

Another important feature of a focused laser beam is a focal depth ∆ at focusing. It characterizes a permissible change of the lens – image range, at which the spot size remains practically the same.   Useful estimations can be made on the  basis of the ratio:

where ∆ — focal depth, rs — spot radius, ± corresponds to the focal depth when moving to and from the lens. At rs ≈ λ we have ∆ ≈ λ. Thus, it follows that with ideal focusing, the focal depth approximately equals to the spot size.

As long as rs = f · θ, thus, to lessen the spot size it is necessary either to shorten the focal range of the lens – which shortens the flange focal distance  of a technological device  and limits the treatment possibilities , or to decrease the beam divergence by way of using a telescopic system (a beam expander)(fig. 1).

A scattering system ensures a more compact configuration and is better for intensive laser beams (∼ 109 W/cm2).

Fig. 1 –  Telescopic optical systems with: а) a converging lens, b) a diverging lens 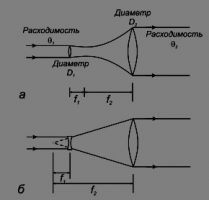 When the lenses are coordinated by aperture, when the beam fills both lenses, the divergences of the incident and outgoing beams are correlated by the formula:

However, there is a significant redistribution of the intensity along the optical axis, which leads to a 100-fold decrease in the depth of field. Therefore, the beam expansion is advantageous for technological processes associated with the surface treatment of materials, and is not optimal for volumetric processing (laser drilling and cutting).

With the help of a mirror, laser beams 1 and 1’ are focused at lens 3. The location of mirror 2 has to be as close to laser beam 1 as possible to create as small as practicable angle α.  Lenses 3 and 4 transform the converging beams into parallel ones. This is necessary for mirror 2 positioning and beam transport to  lens 5, ensuring focusing of the beam at the workpiece.

Angle α between the beams (they are not strictly parallel) is important to evaluate the range.

Pluses: rigid fixation of the optics at assembling, absence of moving elements, possibility of positioning (calibration) at the assembling stage.

The method is built by contradiction. In laser technology beam switching to various workstations is  often needed (fig. 3).  It is done mostly to increase the units productivity. In variant A switching is done with the help of light-dividing mirrors 4. In this scheme the number of working  branches is determined by the energy of the radiator (laser source) and the losses on the mirrors, and the cross section of the beam remained unchanged. Scheme B provides beam switching using prism 9, which  can have multiple reflective surfaces. Scheme B provides for a two-sided beam output directly from the resonator using light-dividing prism-cube 8.

It is offered to use a light-dividing plate according to the scheme on fig. 4.

Minuses: issues with focusing. Could be solved with a lens between elements 2 and 3; it is also possible to ensure parallelism of the beams (without expansion) at the outputs of each laser; the latter is more efficient;  as for the former – the beams will be close enough, but of a different diameter and  divergence.

Scheme and components: 2 laser radiators, an analyzer  (a dispersion prism in the form of an equiangular triangle, or prism).

The laser beams go through the dispersive prism. Due to the reflective prism faces, we have two beams at the output. We need to focus them at the prism top so that to ensure as minimal space between them as possible,

Pluses: compactness, rigid fixation of the optics at the assembling stage, cheapness

Minuses: difficulty of positioning, the beam is too diffused, a converging lens is needed.

Not possible: no possibility to insert a cube inside the resonator; this method is not efficient without a resonator. We have already discussed it. This kind of cubes are on the market: https://www.youtube.com/watch?v=Bx_5wMYNlRc (2.36–3.15). These cubes for physics experiments are used as prisms: they split white light into its components. The video shows how different beams are converged into one white light. Our lasers have various wave lengths and we cannot converge their beams into one with the help of a cube.

But it seems that they are also not effective.

Still looking for the best solution… We will do research with  4-12″ Optical Acrylic Concave Mirror.

Wait for your comments and ideas…